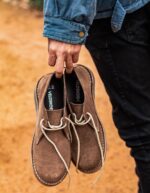 The history of Veldskoen is as rich and diverse as the country they come from. There are various groups of people who believe the Veldskoen, or a version of it, started with them.

The word "Veldskoen", was first documented by the Dutch settlers who arrived in Southern Africa almost 400 years ago. It means "field shoes." However, according to Khoisan tribal folklore, there were leather shoes, cut from a single hide, being made and worn by the tribe, as far back as 1000 years before that.

According to GQ magazine, Nathan Clark, of Clarks Shoes, was serving in the second world war when he noticed South African officers wearing, in his own words, “strange leather shoes”. We like to believe they all had a hand, and a foot, in the Veldskoen story!